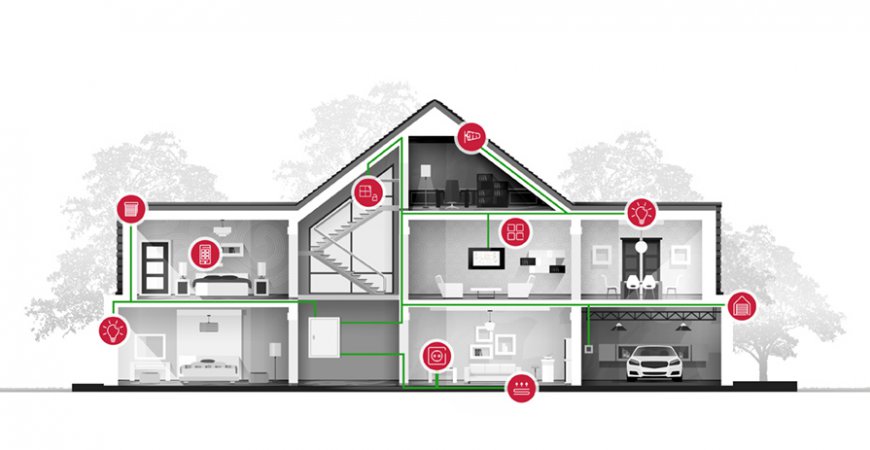 Story: How did I start remodeling my house on Smarthome? Part 2.

How I remodeled my house to "SMARThome", part two.

Since May 2018, when the previous part of my report ended in the autumn of 2020, the development has not been so fast and I have rather focused on completing the considered functions, getting used to the system and programming the functions. I'm not just an extra programmer, so in my case these are just magic and block scenes.

I bought an Aeotec Home Energy Meter 60 A. At that time, I had two home switchboards, each with a separate supply from a single meter. I installed the meter in a switchboard in the technical room in the pool, where there is a completely dominant consumption of EE (heat pump and other properties for heating (heating coils), pool control, thermal solar, DHW circulation). Physical installation due to the total cramped switchboard was a punishment (he is not exactly a small meter) and a decent electrician would snatch it all out…

The connection to Fibaro was already seamless, but I never connected any automation function to the meter. I dismantled it in the autumn of 2020, when it was replaced by a consumption and production meter for a photovoltaic power plant, and since then it has been unused.

Conversion of 0-10 V sensors from the original installation to Fibaro:

After the failure to use the Fibaro Binary Sensor and in the first part of the report, I used the Fibaro RGBW module. For the four inputs, the connection was completely without problems, installation in Fibaro as well. Then I just set up the correct temperature transfers and it was done. It lasted about half a year, then probably during some reinstallation of the software, the temperature transfer for the pool water changed about twice, so I can boast that a properly flooded pool has 48 ° C for me. Of course, this is not true, it is about 27 ° C, but automation of heating does not matter, I just readjusted the scenes. So now I have the following inputs connected here: Pool water temperature, Storage tank water inlet temperature, Storage tank water outlet temperature and Outdoor temperature. I do not use the outdoor temperature systemically, because the sun shines on it all morning and I systematically use the outdoor temperature according to the first part, where the sensor is located as it should be, ie on the north side without the possibility of exposure at a height of about 2 meters.

In the end, I didn't implement it. The part of the gate where the motor, control unit and power supply are next door (this is not a problem), but the control part is at 24 V, which would also be solvable, but overall the benefit over a conventional remote control did not seem to benefit at all…

It turned out similarly there. Making a hole in the wall, figuring out how to stretch the power supply and the like was a lot of work and nobody comes to us either. But we bought the bell last year.

Cellars and air conditioning control in it:

As already mentioned in the first part, the drawer in the area before entering the cellar behind the stairs helped, the temperature measurement system works without problems and there is no problem with it. In the end, I didn't connect the air conditioning to Fibaro because we judged that we didn't need it at all. Even in summer the temperature does not exceed 16°C, in winter it does not fall below 6°C. Suitable for us. Its connection is completely trivial. Integrate the Fibaro ON/OFF relay into the wall switch and solve any automation with scenes.

Connection of the pool recuperation unit to Fibaro:

After gaining experience with Fibaro, it seems to me that it is too complicated (I really am not a programmer) and in principle unnecessary. The heat recovery unit has its application, primarily running on the home network, it also allows remote control (although it is quite complicated). However, operation is not very common. If the pool is not heated for a long time, the temperature is set at 23 ° C. If the pool is used, then it is set to 28 ° C, the Norm / Norm mode does not change except for the Christmas period, when the use of the pool is significantly high due to visits, then the Max / Max mode is given. We are at home at this time, of course, so separate control doesn't matter. 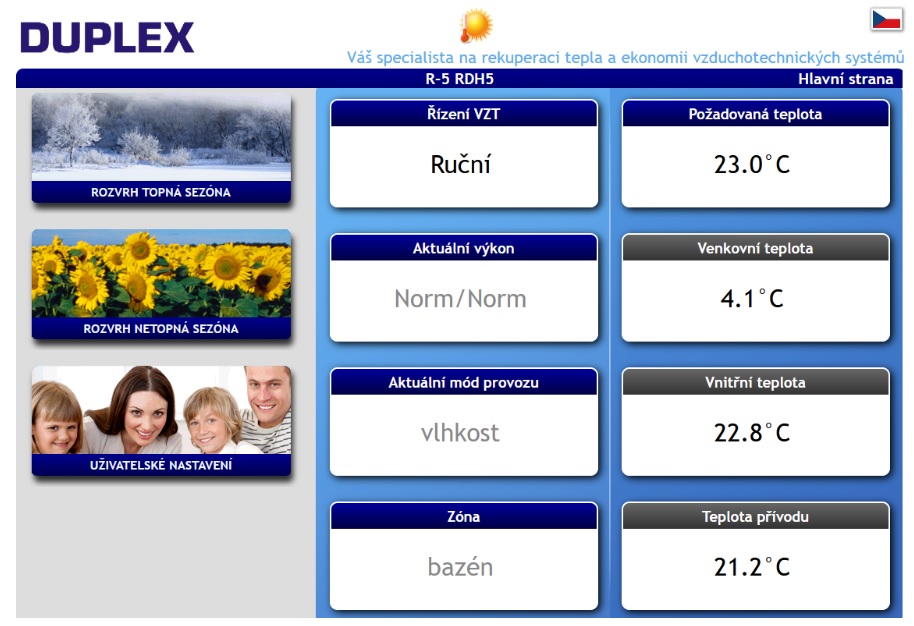 The air temperature and humidity in the pool hall are, of course, controlled by the Fibar using the Aeotec Multisensor, followed by Alarm when the humidity rises above 70%. Here, automation with a heat recovery unit would be useful here, because in this case it is necessary to either switch the operating mode to Max / Max or increase the temperature by at least 2 ° C, ideally both at the same time. However, it happened twice in 4 years, it caused a long power outage, when the warning came the same after the resumption of EE supply and thus expost. Otherwise, the heat recovery unit has sufficient power to maintain 40 cubic meters of water at a humidity of about 55-62%. 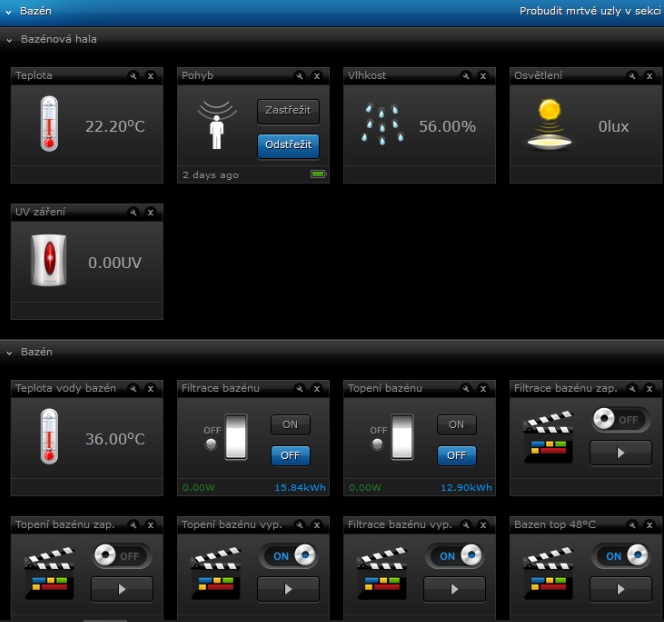 The previous owner sold the house without a heating source for the house (the house was heated from the next house). Given that there was an electric boiler by the pool and the heating of the pool and conservatory was fully functional, it was impossible to find out before buying the house. We agreed to buy a heat pump within the purchase price and have it installed. In two days, his "metal farmer" was with me and asked where I wanted to stab him. I will omit the others, but an "idiot" who can destroy everything, including filling another refrigerant, should really not be allowed to do this job. So in the end, it lasted with great difficulty for 2.5 years and left the barracks. You can also find it funny that after the failure of the four-way valve (heating, defrosting the evaporator) I had to heat the evaporator with infrared heating in the winter to turn the control down, keep it running and have something to defrost the evaporator.

It was also important for the above-mentioned to have the automation of the electric trench lowered so that I would not beat my pants.

Everything is governed by simple scenes. The temperature above 42°C is given by the requirement to maintain the temperature of the DHW for showering, the flooring could withstand even less.

In addition, a Fibaro relay is installed in the thermal solar control unit, which signals the function of the circulation pump. It's just an indication, I haven't found a meaningful automation function for it. After all, if there is a more serious fault with this device, it will leave the house and its place on the roof will be replaced by other PV panels.

In August 2018, according to the memories of an older neighbor, we found a well in the jungle behind the house. The classic one that was everywhere. I dismantled it, worked with the pumps for a while until I gave up some savings and bought a quality pump for drilled wells for a depth of up to 30 meters.

We use water only for watering, not for drinking. The well gives about 800 liters per day, if it is regularly pumped and I pump water into a tank with a volume of 1000 liters.

The control is very simple. The electricity is supplied by a switched Fibaro wall plug, which is controlled either by the switch-on scene (very simple and switches on every 6 hours) or when the summer is like in 2021, it is started manually at the socket (significantly low water consumption). The second scene ensures that the pump is switched off safely so that it does not run empty. They are controlled by the power input of the pump. If the pump is really pumping, it draws 900 - 1000 W. If it goes idle, it drops to about 500 - 600 W. 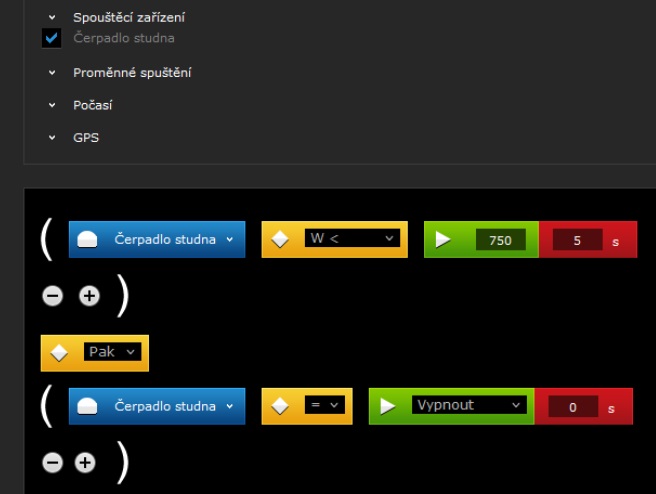 The function is completely problem-free after tuning the start interval, which is in the scene of those 5 seconds without measurement.

The irrigation function is connected to the Fibaro socket in the cellar, which primarily serves as a signal repeater for the cellar. If irrigation is needed, a domestic waterworks is started, which maintains a water pressure of 1 - 3 bar in the system.

The initial installation was for hose watering only. But it was too demanding for me, so I bought micro-irrigation, divided them into individual branches (vineyards, strawberries, melons, tomatoes and peaches). I immediately encountered the problem of algae formation in the tank, I finally solved it by installing filters (which I then had to rinse twice a week) and finally the problem was removed by the recipe of our grandmothers and grandparents. Take a piece of copper gutter and put it in the tank. And wonder of the world, the problem is gone. After the installation of micro-irrigation, the consumption of water for irrigation increased significantly from about 100 liters per day to over 500 liters per day. This was not a problem, the well managed to supply it without any problems, but in the 2020 season, except for strawberries and peaches (and peaches ate the axes), everything became moldy… So in 2021 we returned to the hose twice a day. There was also one interesting problem. If the vineyard was watered with micro-irrigation directly to the trees, then weeds did not grow in the spaces between. Unfortunately, almost all the wine has become moldy. In the normal watering with a hose, although we also try to water only the trees, there were too many weeds. Due to bad August, the wine did not run out, nor did the melons, so we had tomatoes, peaches not coming (the axes did not arrive) and sour wine…

And that's about all that happened in my smart home between May 2018 and autumn 2020. 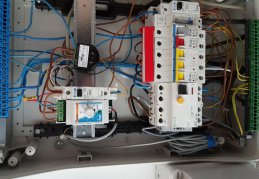 Story: How did I start remodeling my house on Smarthome?

Part 1: Beginning with an intelligent house and first experience